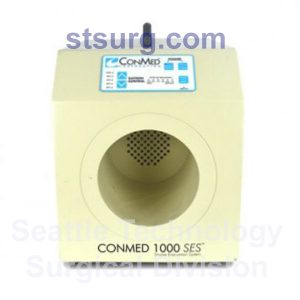 The ConMed 1000SES has been designed with a high suction, high flow rate centrifugal action pump. The ultra-quiet motor is used to draw the surgical smoke from the surgical site, through the vacuum tubing and into the 1000 SES filter where the surgical smoke is processed by a series of filters. A single disposable filter is used to simplify the installation and removal during filter changes. The filter is completely enclosed to protect the healthcare personnel from potential contamination during filter changes.

The electronic controls on the face panel of the 1000 SES System have been designed to be user-friendly and to facilitate
set up and operation.